What Is The Alexander Technique?

F.M. Alexander (1869-1955) was born in Tasmania. He made a career for himself giving recitations of the works of Shakespeare. He developed voice problems, which caused hoarseness and loss of voice during recitations. He followed doctors' advice and rested before performances.
As Alexander's problems did not improve he started to work on himself to find a solution. He used mirrors to observe himself during ordinary speaking and when reciting. He found that when he was reciting he pulled his head back, depressed his larynx and sucked in breath through his mouth. In time he noticed that he also shortened in stature.
Alexander experimented for months and finally found a way of changing his use of himself which allowed him to recite without losing his voice. He realised that he needed to prevent habits of use which were harmful, and use his head, neck and back in a way which allowed him to function effectively.
Alexander developed skill in diagnosing harmful use in individuals. He worked on people using simple procedures, e.g. sitting down and getting up from a chair, standing. Doctors sent patients whom they were unable to treat effectively.  Alexander helped people with a range of ailments including indigestion, sciatica, poor circulation and angina pectoris, as well as so called "nervous and mental troubles" (The Use of The Self pp60) 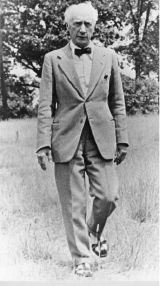